It’s been a year and a half since the last big auto show: Chicago 2020. Roughly a month later, the world virtually shut down. But now, as vaccines are widely available and infection rates are subsequently dropping, auto shows are picking up right where they all ended: Chicago. So what was it like coming back to a big gathering of shiny new cars? Well, this one was bizarre, for all kinds of reasons.

News Editor Joel Stocksdale and Road Test Editor Zac Palmer share what it was like on the floor.

Hey you, under the forklift

Joel Stocksdale: We knew going into this show things would not be the way they used to be. Though not for the reasons you might think. For instance, masks weren’t required, there were large tables for journalists to set up shop as usual, and people mingled freely. But the initial letter we received mentioned something odd: The dress code was relaxed to “casual.” Turns out, that’s because the air conditioning wasn’t running in the main show hall. I’m sure they didn’t want out-of-shape car journalists (myself included) passing out on displays. And while it wasn’t hot, it was Florida levels of humid. So bear that in mind if we look wilted in videos.

And we weren’t quite ready for the construction going on. Normally car-show exhibits are completed by media preview day, but not this time. As we stood around listening to press conferences, forklifts whizzed by, power tools hummed as displays went up, and cars were still being wheeled in. The first conference of the day was with Jeep, and there was only one vehicle accessible. After the conference, about five more were added. It was actually neat to see the show as a work in progress — how the carpets are plastic-wrapped as cars are brought in, then the wrap is removed to keep things clean; to see how fast things come together. But the noise was a challenge for listening to representatives and for recording video. And we can’t imagine the construction folks appreciated a bunch of bumbling writers wandering around, either. Oh, and adding to the noise were the periodic car alarm activations, which sent some poor staff member digging out the box or bag of 20 key fobs to try and find the right one.

Another weird thing: Most auto shows let journalists wander around willy nilly to shoot photos and videos, talk with representatives, and get familiar with the cars. That was not supposed to happen this time. All the press people were shepherded in a group from booth to booth. We suspect this was to prevent us from impeding construction, and probably to reduce the chance of an injury lawsuit. Zac and I were accosted at one point for having moved ahead slightly to look at some Nissans. But as the day wore on, it was clear that the staff wouldn’t or couldn’t continue to herd cats.

And of course, this is a small, short, stripped-down show. (Public days are July 15-19, tomorrow through Monday.) A number of automakers were not present, including Hyundai, Mazda, Mercedes-Benz, Genesis, Dodge, Chrysler, Cadillac, and probably others I’m forgetting. It was also a single press day starting at 9:30 a.m. and pretty much ending at 2 p.m. Some of the press conferences were basically a single representative talking from a sheet of notes about a model, without all the wild lights, smoke and projection screens we’ve become accustomed to in reveals. Plus, most automakers didn’t have anything completely new to reveal.

On the other hand, it was exciting to get up close to models revealed during the pandemic that we hadn’t had a chance to see. The Kia EV6, Nissan Ariya, Nissan Z Proto, Nissan Frontier, BMW iX, Ford Maverick and Ford F-150 Lightning were all present. You’ll get to learn more about them as we add more videos.

Despite the strangeness, it was good to be back at a show, to see friends and to finally get up close and personal with the latest and greatest automobiles once again. And we’re hoping that the next few shows — New York, Detroit and Los Angeles — will be a little closer to what we remember. Or that at least they have the air conditioning on.

The cars, from Ariya to Z

Zac Palmer: Boy, is it good to be back. Joel described the feeling of the floor well — I only had one semi-close encounter with a crane operator, so I’ll give you some quick reactions to what we came here for: the cars. 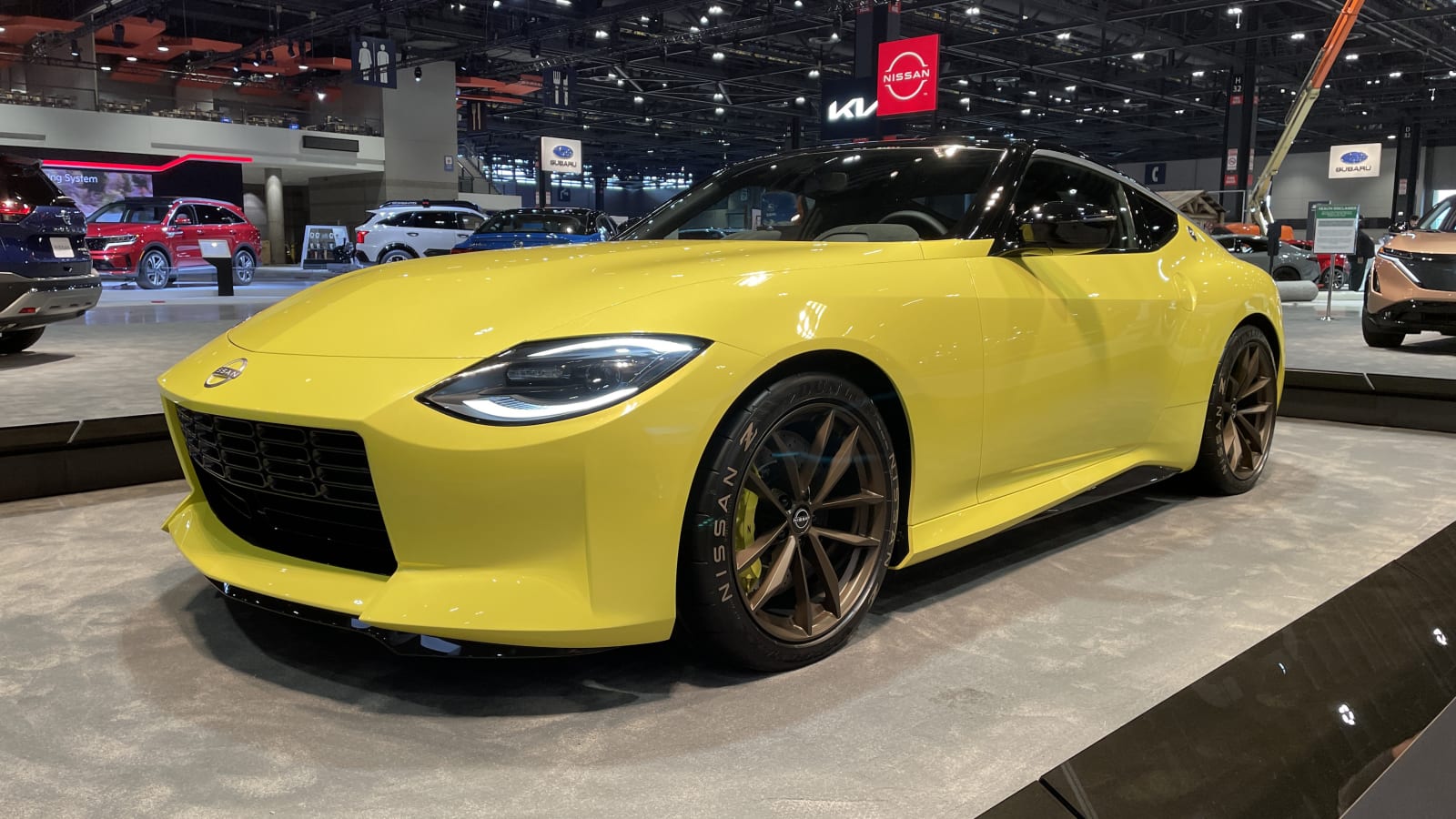 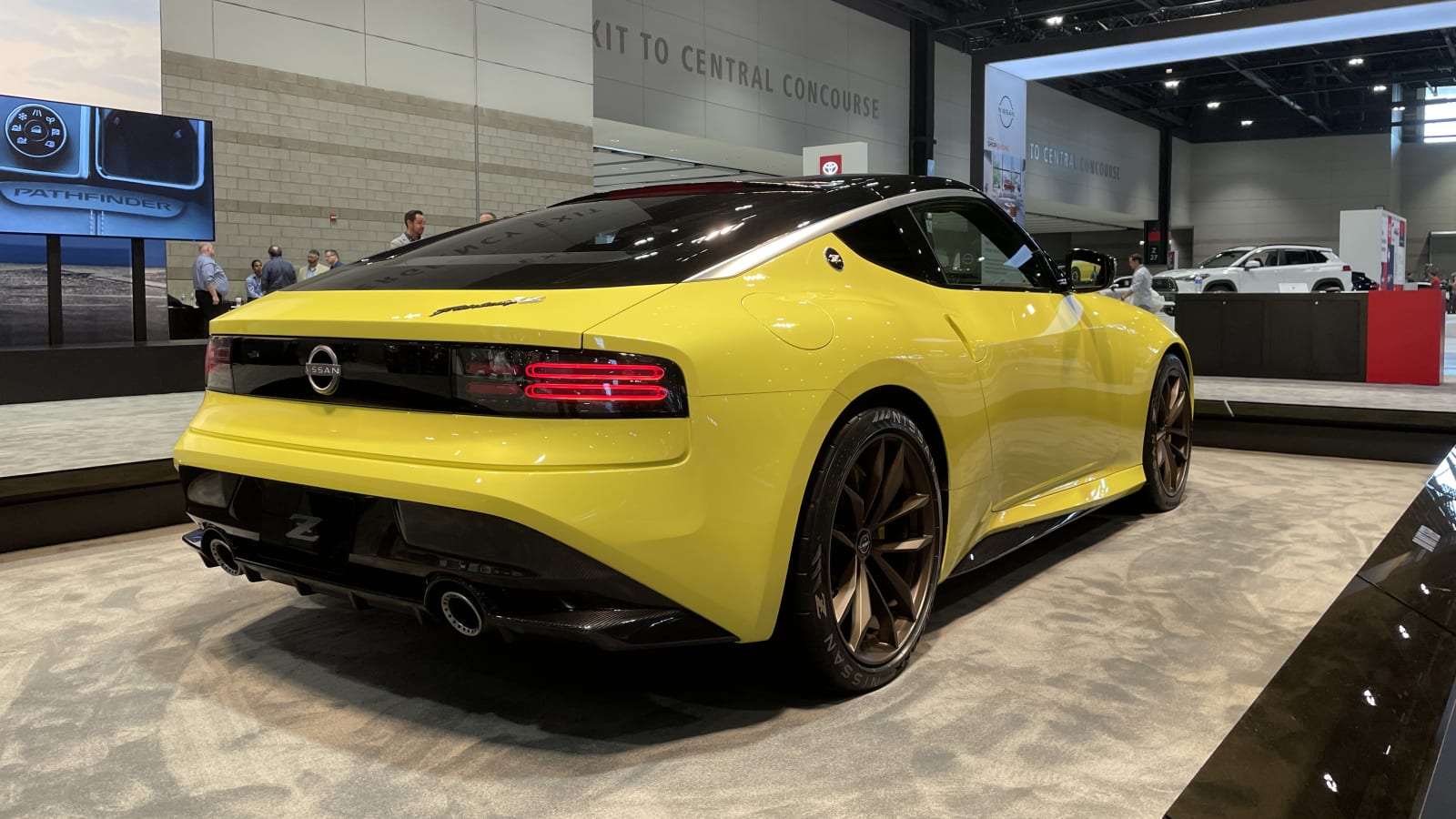 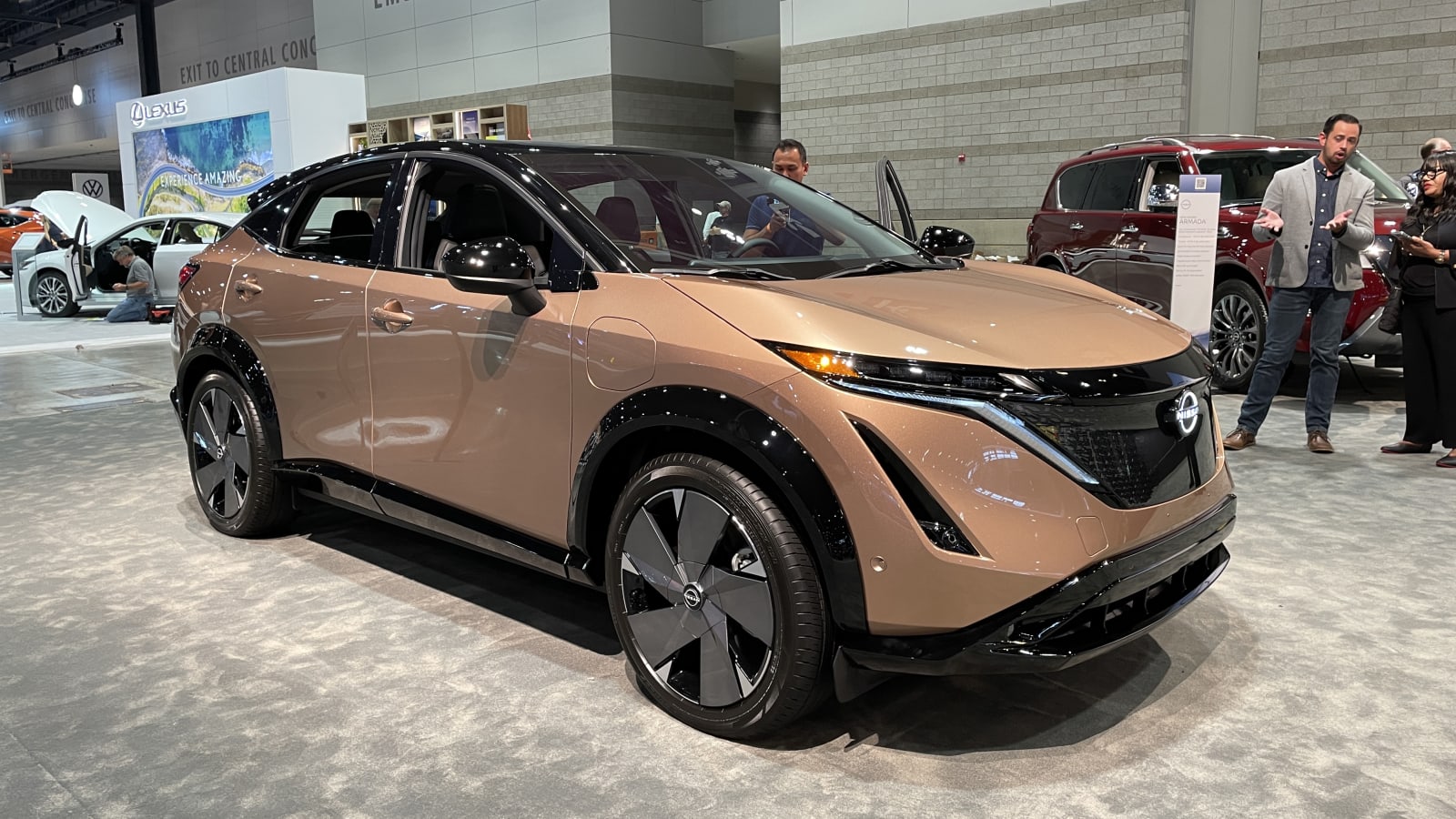 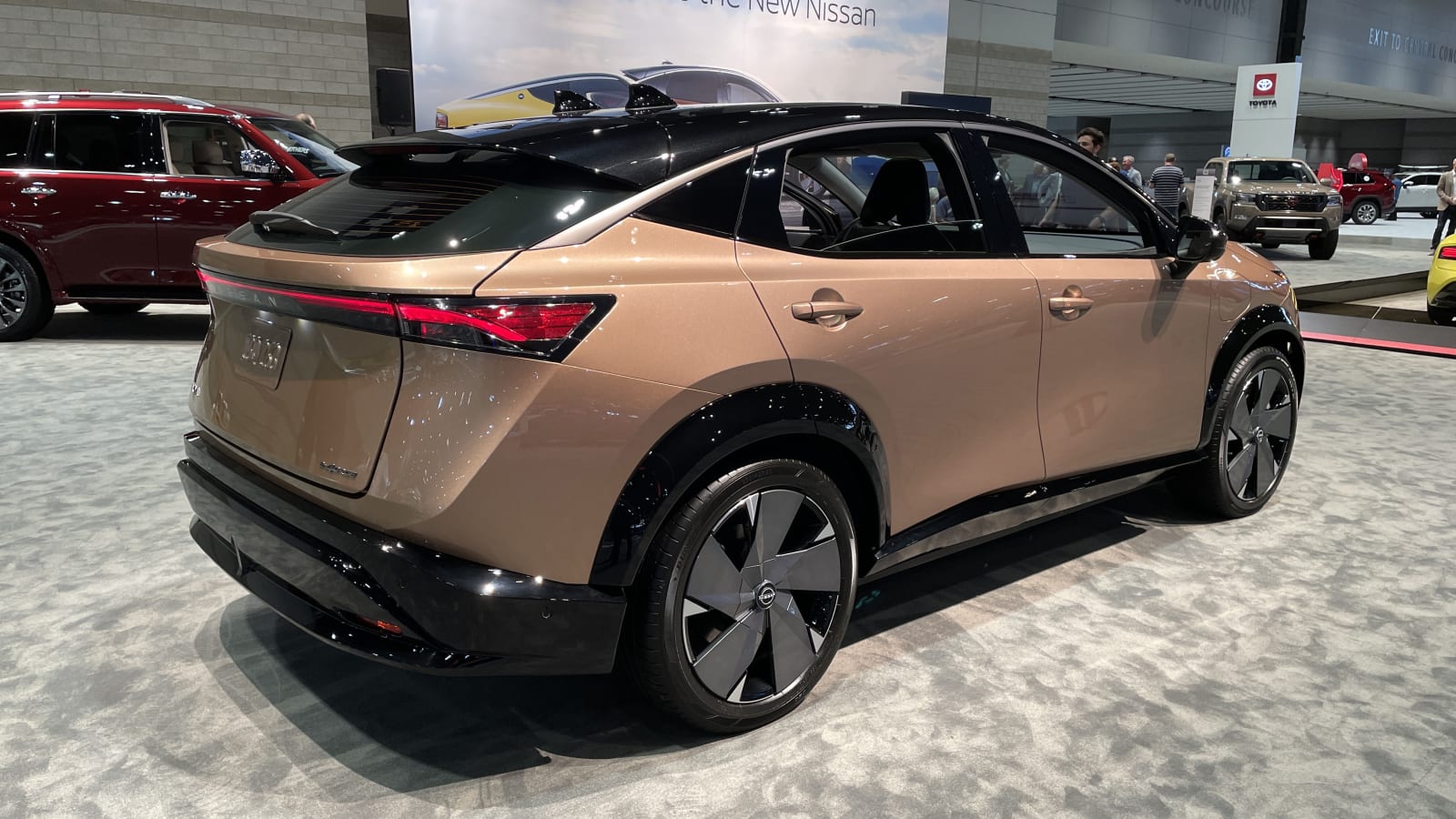 The Nissan booth might’ve been the coolest of the show. I wouldn’t normally say such a thing, but Chicago played host to three new Nissans we’d only ever seen on the internet: the Z Proto, Ariya and Frontier. The Z Proto is my star of the show. It’s across the way from Toyota’s Supra on the show floor, and despite the Supra still looking fabulous, seeing the Z Proto in person is a moving experience. I promise the grille looks better in person.

Nissan’s Ariya impressed me in different ways. The interior is such a lovely surprise with its touch haptic controls integrated into the wood trim and attractive use of textured lighting.

And the Frontier looks even better in person — I’m excited to be driving that pickup soon. 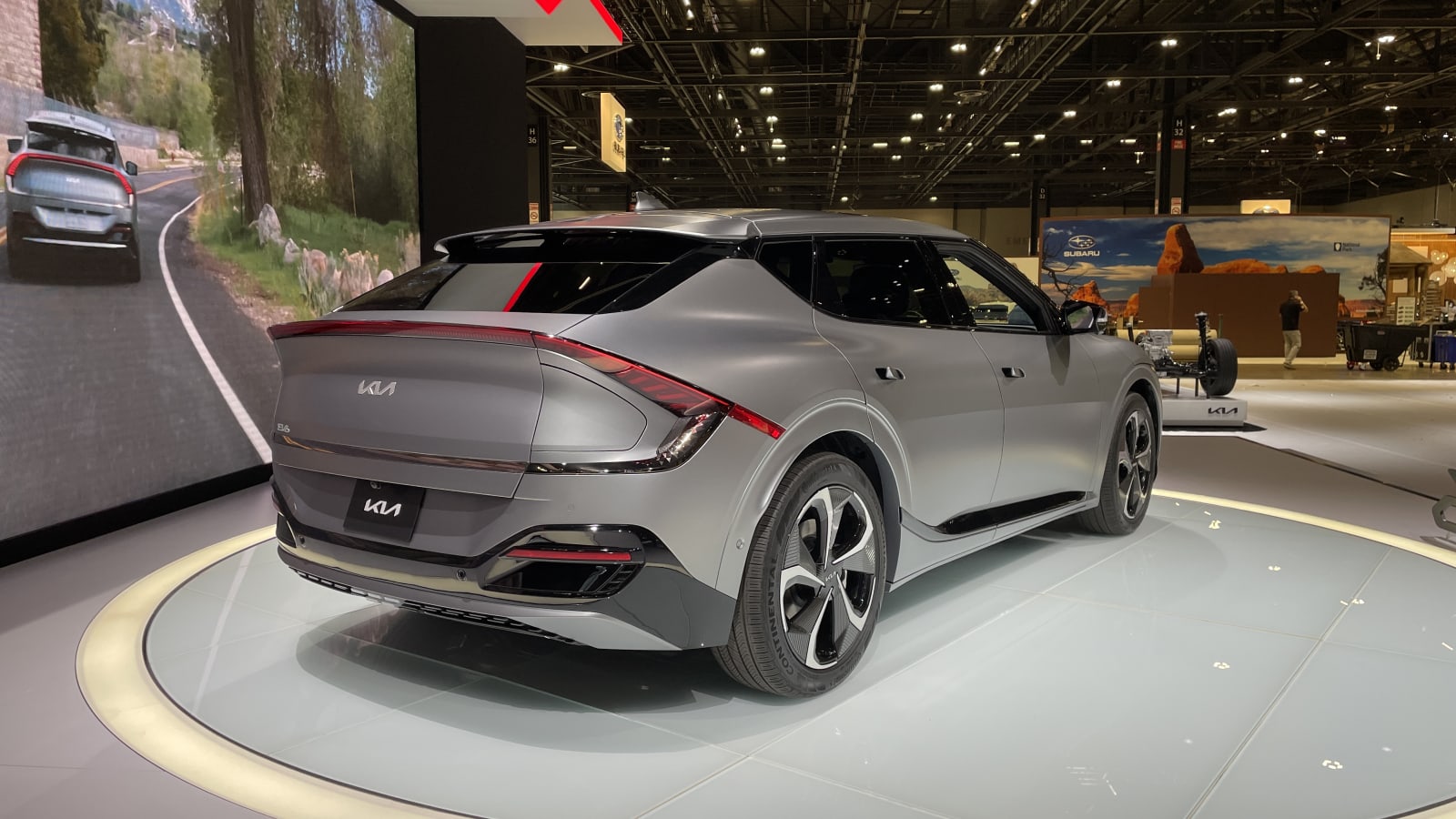 The other big presence at the show was the Kia EV6. It’s funky and different in all the right ways. Similar to the Ariya, I was amazed at how futuristic and interesting the interior design was. Non-luxury carmakers are starting to get creative with lighting in ways that even luxury carmakers aren’t, and the EV6 is a shining example of this. 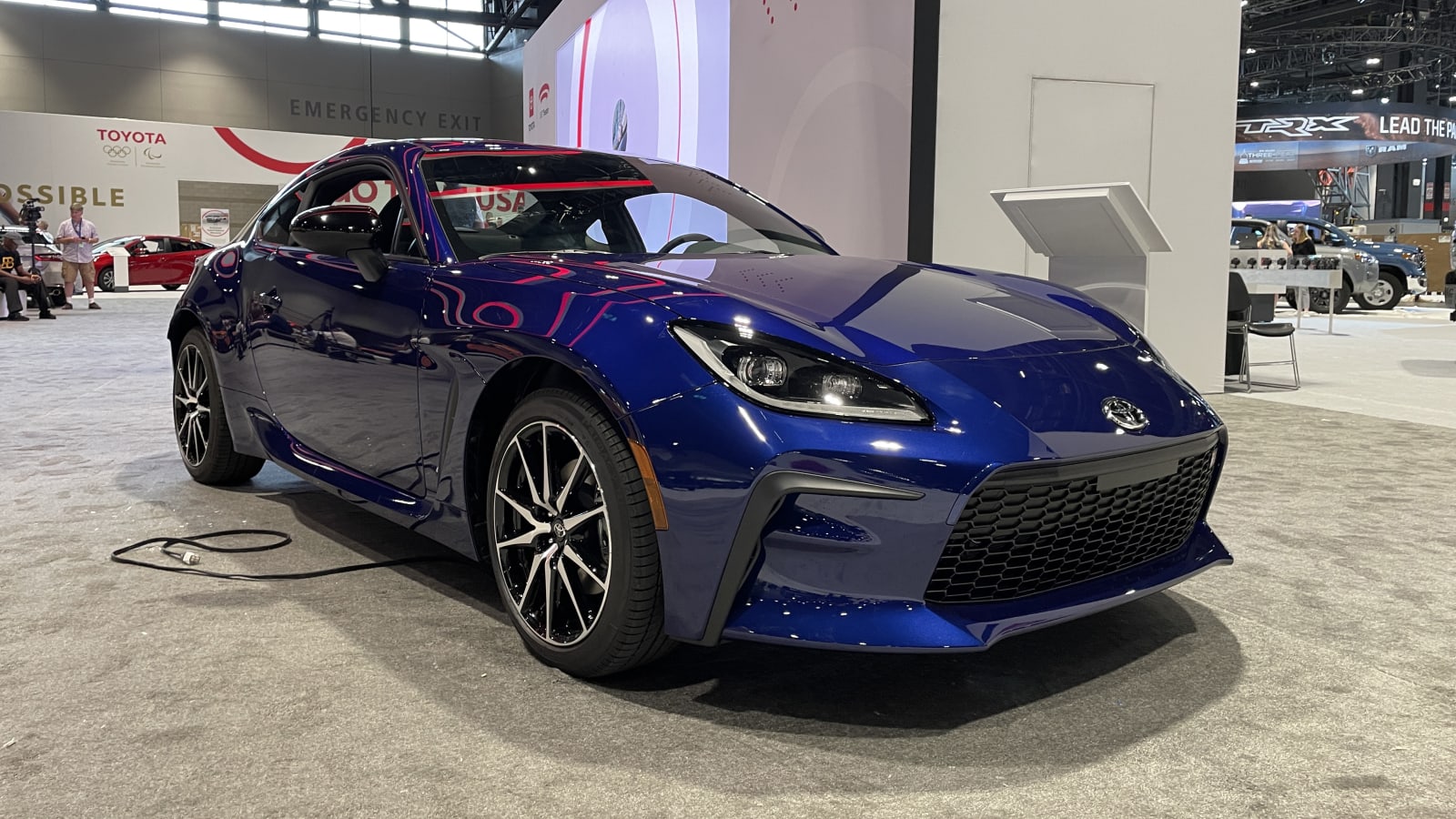 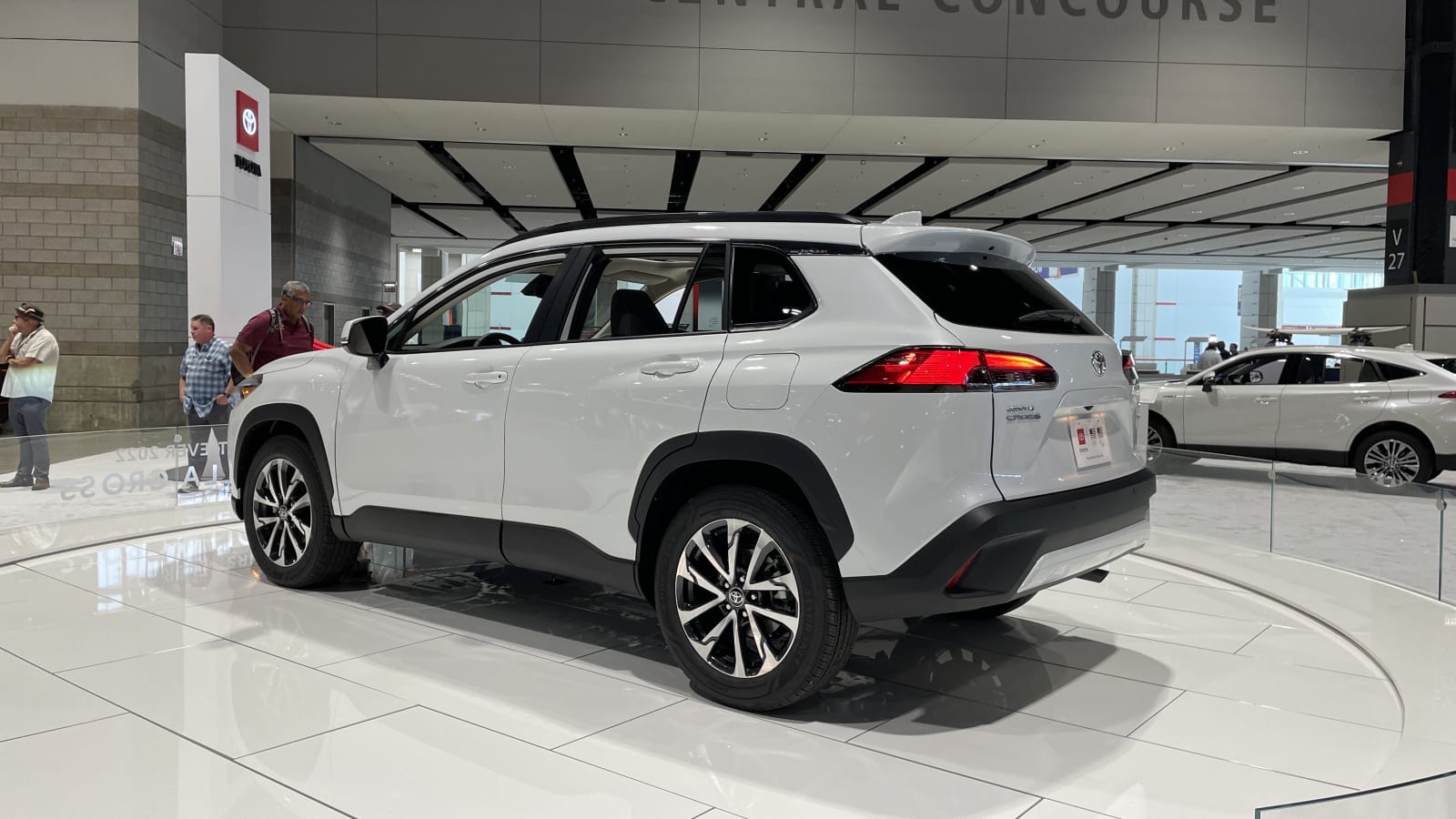 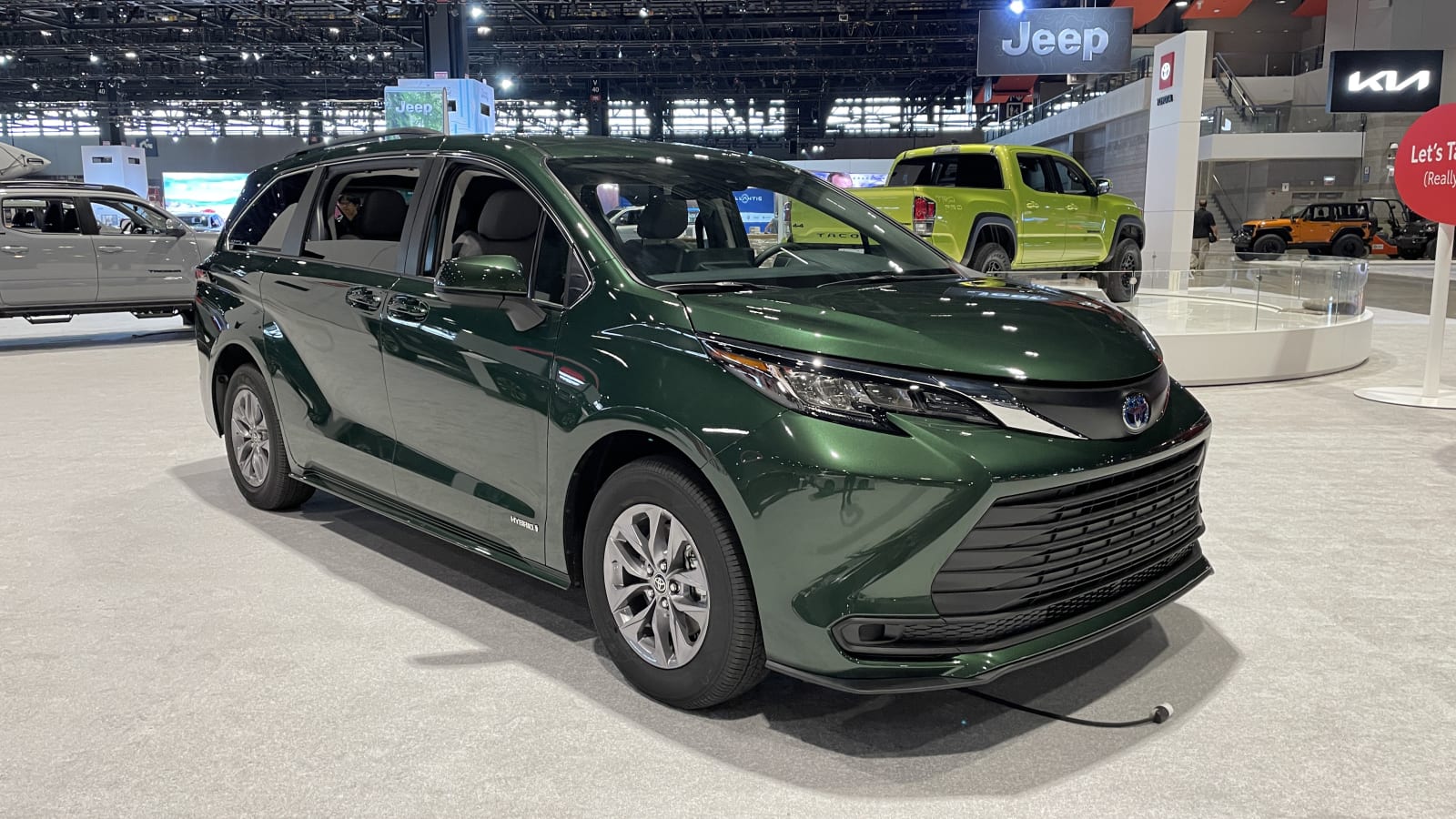 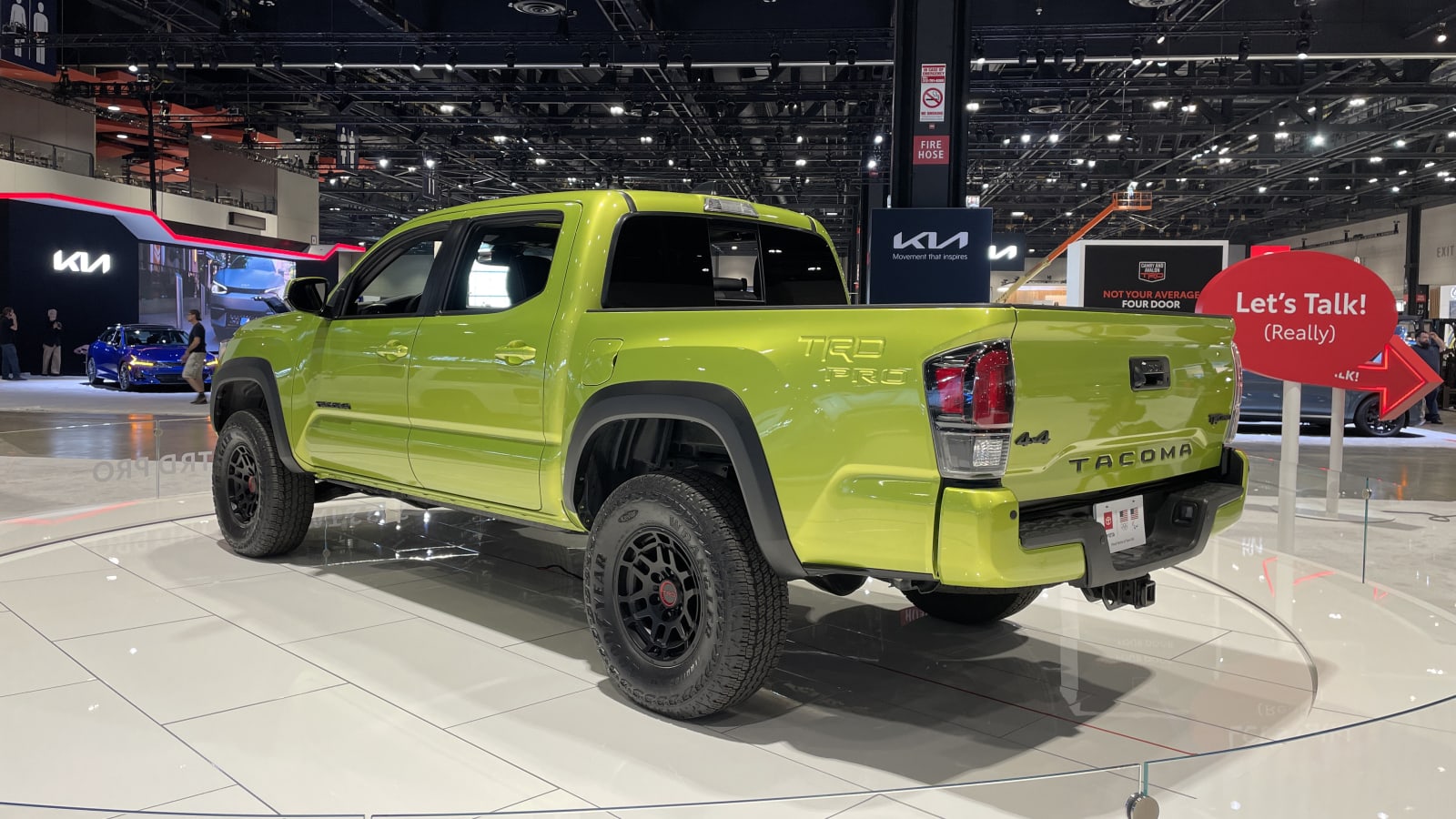 I saw lots of the Toyotas that Joel saw not long ago in Texas. The GR 86 didn’t leave any lasting design impressions — it looks fine, will drive splendidly. Toyota’s radioactive Tacoma TRD Pro color is a big win. And the lifted Sienna Woodland is a funny sight to see. It needs some chunkier tires and plastic cladding to seal the deal, though.

We’d be remiss not to mention the 2022 Jeep Compass amongst all this, too. It was the only big “reveal” of the day. But that said, we had already seen the Euro model previous to today. Regardless, the interior of this little Jeep is the big update, and it looks great in person.

If you’ve made it this far, you’re likely curious (or maybe not) about what was fed to all us journalists. Pizza. Pizza is the answer. I had a Chicago-style breakfast pizza (glorified quiche) for breakfast, more Chicago-style pizza for lunch, and who knows. I might just have pizza for dinner, too. When in Chicago. 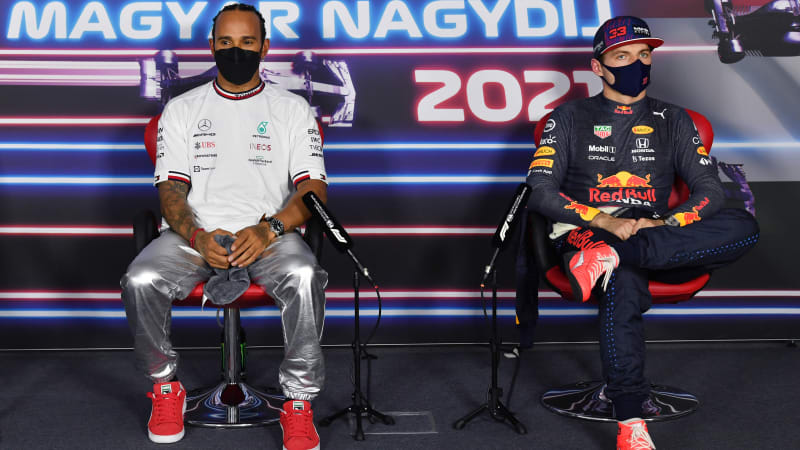 Lewis Hamilton fueled by boos from crowd after Hungary pole 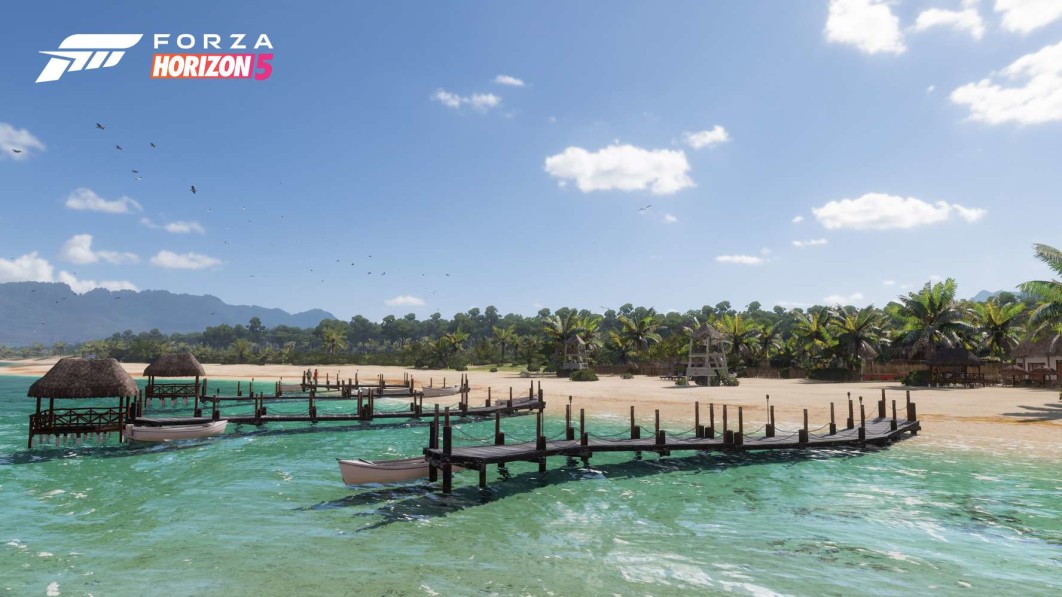 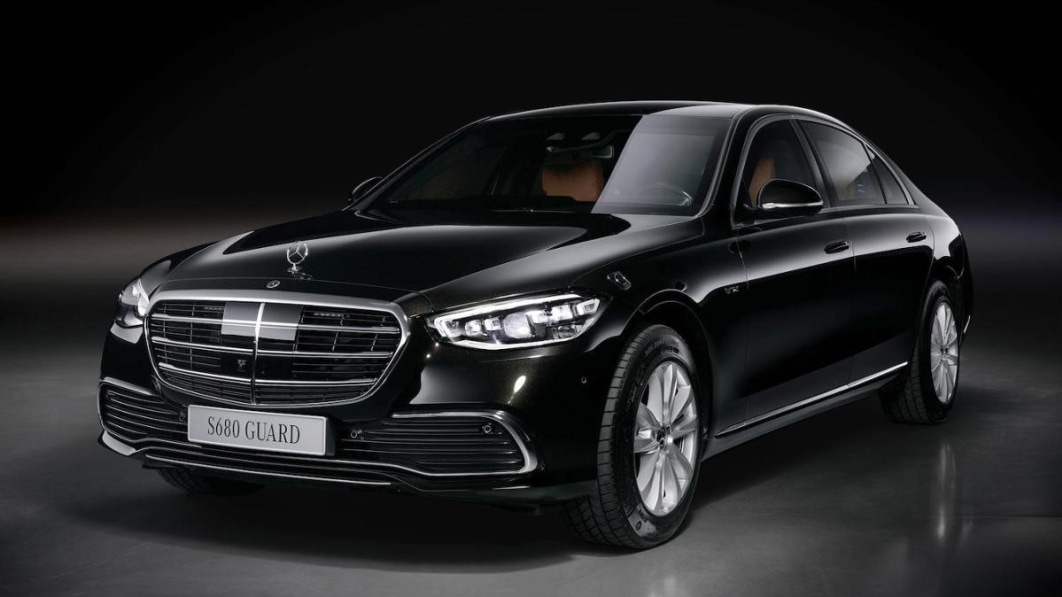